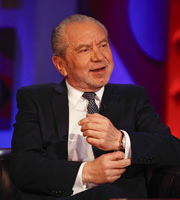 Jake Gyllenhaal says he enjoyed bulking up for Prince Of Persia: "When I got the muscles... I felt great."

He also tells Jonathan that he plays a viagra salesman in his next movie but doesn't need it himself: "I have no problems!"

Alan Sugar explains how he was inspired by the kids in Junior Apprentice: "It's really heart-warming to watch these youngsters, and says he has faith in younger generation: "It's going to inspire so many young people because they get a bad name, and this lot will bring confidence back in to the country."

American Idol's Adam Lambert says he remains defiant about controversial US TV kiss: "I felt it was really important not to make an apology, I stood my ground," and says how he wasn't fazed by Simon Cowell: "I respect his honesty, I like that. I didn't take it personally."

Finally, he tells Jonathan how he weighed 18 stone when younger and didn't get slim until he came out: "I was a porker, eating my feelings... I changed my habits, finally embraced who I was and felt better."