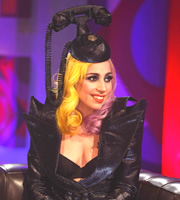 In a frank and candid interview Lady GaGa says she will never dress down: "I would rather die than have my fans not see me in a pair of high heels... I'd never give up my wigs and hats for anything... You see legendary people taking out their trash, I think it's destroying showbusiness... I feel completely detached from the celebrity world, you never see me falling out of nightclubs."

She says she is bereft after the death of good friend Alexander McQueen: "He was the kindest human being, I feel left with nobody to inspire me any more." And has no friends: "I didn't speak to anyone at the Brits... I'm an outcast from the music industry, I don't have any friends in the music business."

Lady GaGa also says Her Majesty The Queen admired her huge piano at the Royal Variety Performance: "There is no greater lady than the Queen." And the singer says she is more accepted in Britain than in the US: "People in Britain are the ones who've really been my friends."

She denies she dresses for effect: "Be whatever you want to be, it's not about emulating me... it's all right to be different" and says she doesn't have time for a relationship: "I don't have time to get to know anybody, I'm single and alone... nobody would put up with my craziness."

Stephen Moyer says he is besieged by fans wanting to be bitten: "They want you to break skin!" He sets the record straight on comments about Robert Pattinson: "I said his character was the Diet Coke of vampires... I upset every 14 year old on the planet that day, I was getting hate mail." Stephen says he fell in love with co-star Anna Paquin in public: "We've been working together for two-and-a-half years... When we're at home alone in bed I miss the crew a bit." And he confirms they will marry.

Michael Ball says playing a woman put him into physiotherapy: "Big heels, prosthetic boobs which are very heavy, it puts everything out of kilter." He reveals he'll star in title role of Sweeney Todd next year and confirms a new chat show.

Richard Gere and Goldfrapp were originally billed to appear in this episode.