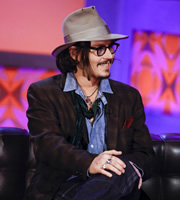 Johnny Depp says that before the Pirates Of The Caribbean films he wasn't a popular choice for leading man: "They used to call me box office poison."

He says he threatened to leave the first Pirates film: "I made choices for the character I believed in. [I said] this is the guy. If you don't like him you're welcome to fire me."

And he refuses to star in a rom-com film: "I've been asked a couple of times but I just couldn't do it, no way, I'd be a wreck."

Johnny Depp says he has never seen himself in a Tim Burton movie but wants to see the latest, Alice In Wonderland: "I prefer to walk away with the experience."

And he hated his teen idol image: "It was pretty weird... I was misrepresented."

He also says he is collaborating with Keith Richards on a new movie and confirms a fourth Pirates Of The Caribbean.

Andrew Lloyd Webber says he has beaten cancer: "If they hadn't found the infection they wouldn't have found the cancer - and luckily I'm in the clear... I'm back."

He denies he's finished with musicals: "I'm writing six new songs for The Wizard Of Oz."