If you live in a world of 'LOL' and 'OMG', the appearance of three members from the cast of Glee may very well delight you, IMHO. If you can remember when English was written proper, like, there's Tom Hardy, Al Green and the Scissor Sisters. FTW. 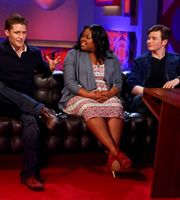 Chris Colfer, Amber Riley and Matthew Morrison from the hit US musical comedy Glee reveal that they hope to do a UK tour. "We don't know for sure but I can almost count on it," says Amber, who also reveals that she loved working at Ikea before finding fame.

The young stars are optimistic that Glee - The Movie is on the way. Chris says: "Hope so, that would be fun." They also hope to do a special Michael Jackson-themed edition of the show.

Soul legend Al Green also joins Jonathan, bringing with him an all-star band include Jools Holland and legendary Pink Floyd guitarist David Gilmour. Despite their credentials, Al reveals that he fines his musicians $1,000 if they make a mistake.

Now an ordained pastor, Al still tells Joanathan that he loved his wild days. He says: "Champagne, girls, girls, girls - but you have to grow up... I'm glad just to be here."

And he talks about being at the cutting edge of fashion, starting the trend for 'manbags' back in the Seventies and even wearing hot pants.

Tom Hardy, star of Christopher Nolan's new sci-fi thriller Inception, tells Jonathan that he doesn't find living in the spotlight easy. He says: "My head's a bit of a dangerous country... I'm genuinely frightened of a lot of people."

He also reveals that he can't remember much of his past, saying: "A lot of it's blackout, I'm very grateful to be here, no joke."

Tom talks about bulking up for his next movie, Warrior, in which he plays a cage-fighter. His secret method for piling on the muscle was chocolate and carrying friends upstairs. He reveals that he broke two ribs and a toe during filming, saying: "A lot of punches were going through."

His ambition now is to play a romantic lead. Tom says: "The zenith would be rom com and be good at it."