Comedy from Jonathan's tennis bitch Jimmy Carr; magic and silence from Penn & Teller (respectively) and Canadian actress Ellen Page, who appeared in Juno, Inception and Trailer Park Boys. If you're inclined to throw your knickers at the television when Sir Tom Jones appears, remember to remove yourself from them first.
Preview clip 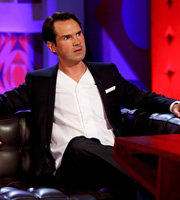 Sir Tom tells Jonathan that he didn't party the night away on his 70th. "It was quiet on my birthday - I didn't want to broadcast it."

He shares his memories of hanging out with Elvis and singing late-night gospel with him in Vegas, and how Elvis sang to him in the shower: "I couldn't understand it," he says. "He used to mumble a lot!"

Comedian Jimmy Carr tells Jonathan how he sometimes gets mistaken for tennis star Roger Federer and that he writes 250 one-liners before each new tour.

He admits he's petrified of doing live TV, and says: "I found it absolutely terrifying," although he confirms he will do more.

Ellen tells Jonathan how Tom Hardy got papped teaching her how to fight on the set of Inception: "It looked like he was beating up a little girl!"

She also reveals that she's nocturnal: "I'm a sleep-walker - I have night hallucinations."

Jonathan is also joined by illusionists Penn & Teller, who criticise David Blaine: "He thinks trick is a dirty word - we couldn't disagree more."