In the second show of the series, Jonathan welcomes sizzling actress Billie Piper and top TV funnyman Alan Carr. Plus chat and performance from the mesmerising Alicia Keys.
Preview clip 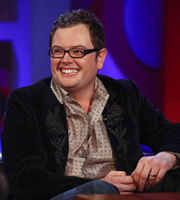 Billie Piper tells Jonathan it is hard being a mother: "It's tricky at times... I'm a competitive mother." She had a scare with baby Winston at Christmas: "We really panicked, he was having trouble breathing, I had quite a big fright with him... they wouldn't tell us what it was."

And she says about having more children: "It's probably too soon but you always have it in your mind once you've had one. We were considering an only child, but it sounds a bit cruel."

Billie searches online for all of husband Laurence's screen partners: "I'm terrible, I realise it's completely insane but I'm quite a jealous lover, I'd rather he didn't do it."

But she won't discuss her sex scenes with Laurence: "We don't talk about it, we don't watch the show together, he seems very relaxed about it which is slightly alarming sometimes."

She says David Tennant is a better kisser than Matt Smith but she has finally said goodbye to Doctor Who: "I think enough is enough now."

And she says she won't ever sing again: "I don't have a great voice, I was basically a charlatan, just faking it really."

Also on this week's show, Alicia Keys dispels retirement rumours: "I would like to have the option to be able to retire at 30 but I definitely have so much more to do... I have to perform, I love it so much."

And she reveals she carried a knife for protection growing up in New York.

Alan Carr tells Jonathan he goes out in disguise to eavesdrop for new material.

Jonathan and the audience all draw Alan Carr's face onto round objects.