Jonathan Ross presents another edition of the current series. His guests are: actor Colin Farrell, Russian supermodel Natalia Vodianova, comedian Jason Manford and chatting and performing, the biggest rapper on the planet, Jay-Z. 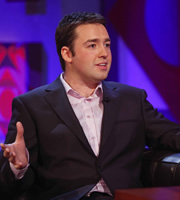 Jay-Z reveals his friend President Barack Obama loves hip-hop: "When I called him he was playing Blueprint in the gym."

He tells Jonathan that Beyonce steals her moves from him: "All the single ladies - that was me!"

And he upstaged P Diddy for his 40th: "Puff throws the best parties ever but I got him this time... he practically MC'd my party."

Jay-Z also says you are never too old to rap: "It can't be a young man's game."

And predicts a second term for Obama: "I've been invited [to the White House] a couple of times... hopefully we'll keep him in eight years so I'll have time to get there."

He also confirms he'll reprise the Wireless Festival in July.

Colin Farrell is candid about how drink controlled him: "There were times when I was with my son and I was wondering how long I would have to spend before I could go off and get p****d."

But he says: "Now - two hours in the pub, then I get bored. I was at that party for long enough."

Jay-Z performed On To the Next One.