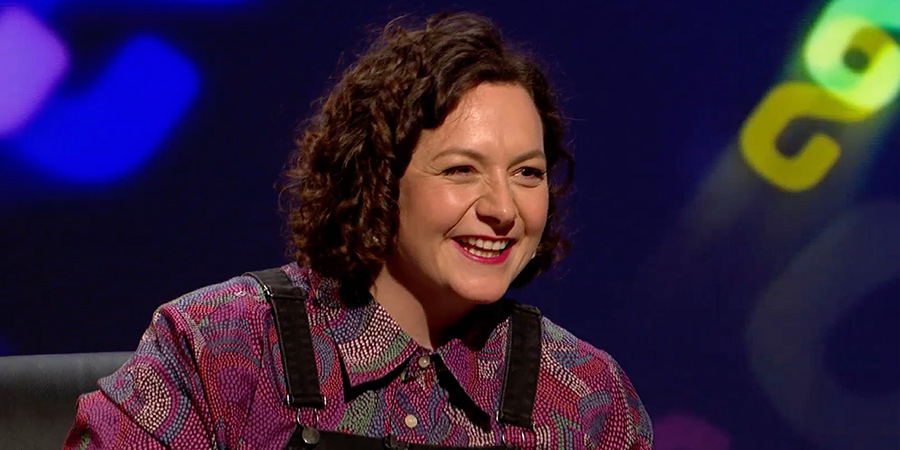 - The main sense typists use is proprioception, also known as kinaesthesia. This is the sense the body has to detect its location without looking. This is the sense that means we don't have to look at our feet when we walk, or you don't have to look at the fork when we eat. Proprioception allows people to touch-type, because you know where the keys are without looking. The only thing you need in order to get started are the F and J keys, which a little raised element to them.

- Tangent: When Sandi was at school, she was taught to touch-type by having a black apron that covered the typewriter and went around her neck, meaning she could not see her hands or the typewriter when typing. Sandi now types so much that she thinks better when she is not looking at the keyboard.

- Tangent: Proprioception allows you to touch your nose with your eyes shut. You can however miss your nose if you are drunk, hence why touching your nose is used as a sobriety test.

- Tangent: You can test proprioception by putting your arm in the air with your fist out as if you are doing a thumbs-up. If you close your eyes you are still ableto grab your thumb with you other thumb and forefinger.

- During the Renaissance, the person who ate better than a king was a food taster. These people had to test the king's food for poison, so that had to eat large amounts of the king's food in order to pick up any traces of poison. By the time the royals received their meal, it was probably cold and half-eaten. Ambroise Pare, a physician to four French kings, wrote in 1585: "Anybody afraid of being poisoned should be wary of meats cooked with much are, very sweet, salty, sour, or notably endued with any other taste." In Pare's time, it was believed that bezoar stones, an undigested mass found in the digestive system of animals, could cure the effects of any poison. They tested this during Pare's lifetime on a cook who had been caught stealing some silver cutlery and thus had been sentenced be hanged. The cook instead agreed to be poisoned, with Pare trying to cure him with the stone. The cook died in agony seven hours later.

- The panel are given a hearing test. They hear three pairs of tones, and they have to say whether the second tone is higher or lower than the first. The answer to each is that they are both higher and lower at the same time as it is an illusion. This is the tritone paradox, where the first tone is two note being played together, and the second tone is in the middle of the first two notes. This illusion was studied by music psychologist Diana Deutsch in 1986, who noticed whether we hear the tone going up or down depends largely on your culture and language.

- Banks smell of many different things. Different banks use different scents to help make their banks more appealing. Scents that have been used include grapefruit, cardamom and chocolate. Using scents in retail establishments is a big business, as using different scents helps people to part with their money. The first bank to do this was the National Australia Bank HQ in Melbourne, who used lime and grapefruit in 2012. Other high-end banks and financial institutions use smells that give a sense of luxury, with one using a fragrance that included mandarin, ozone, green cardamom, black pepper and musk. (Forfeit: Money)

- Tangent: Casinos have found that certain scents will result in people gambling more. The Las Vegas Hilton discovered that people gambled 50% more if the casino had floral smells. The Mirage casino uses Polynesian smells, the Mandalay Bay Southeast Asian smells, the Bellagio North Italian smells. Roisin went to a casino and discovered that people still smoke in them. Sandi says she loves a casino, with Alan says she goes in the roulette wheel.

- Tangent: Supermarkets use smells to increase sales, and some even use smaller floor tiles in front of more expensive sections, because it causes shoppers to slow down.

- The kind of dog that can tell the time is one with a good sense of smell. After you leave the house, your scent lingers and decays. If you have a fairly regular schedule, the dog will notice when your smell has declined to a certain level that it associate with you coming home. Dog researcher Alexandre Horowitz tested this by leaving fairly sweaty shifts from the dog's owner around the house before the owner was due to come back. When the owner returned, the dog was not waiting because the smell was still strong enough to make the dog think that the owner was not returning. It could also be reacting to the time which the dog is regularly fed. (Forfeit: A watch dog; A clocker spaniel)

- Tangent: Dogs don't seem to respond to faces. A study of domesticated dogs in Hungary being shown the back or the front of a human head showed they did not care for either side.

- Alan has a single spotlight shining on him and is asked what spotlight effect feels like. Psychologists refer to the spotlight effect as being the tendency to dramatically overestimate how much attention people are paying to us. In 2000, students were asked to wear a bright yellow Barry Manilow T-shirt to a seminar, and the students were asked to estimate how many people noticed that they were wearing this shirt, and they overestimated by a factor of two.

- Composers who were completely deaf by the time of their final work include Gabriel Faure and Ralph Vaughan Williams, the latter of whom went death due to the guns of World War One. Recent research shows that Ludwig Van Beethoven could still hear a little bit by the time he wrote his ninth symphony in 1824. Beethoven carried conversation books so he could talk to people by writing things down in them, as well as a general diary. Musicologist Theodore Albrecht from Kent State University, Ohio, has spent decades translating these books into English and has found 23 references to Beethoven's hearing in his own writing in this time. In 1823, Beethoven wrote: "Baths and country air could improve many things. Just do not use mechanical devices, ear trumpets too early. By abstaining from using them, I have fairly preserved my left ear this way." Albrecht believed Beethoven could hear, increasingly faintly, for two years after the ninth symphony. (Forfeit: Beethoven)

- In the Middle Ages, people threw their excrement into rivers. There is an anecdote about Louis IX of France about a student who poured his chamber pot out onto the king, and Louis gave him a prebendary, a remunerative based in a cathedral, because he was so thrilled to see a young person up early in the morning. However, the idea that people threw their waste into the streets is wrong, mainly because everyone knew that human waste carried diseases. People were responsible for the cleanliness of the streets outside their own houses. In the 1300s, one man was beaten to death for dropping eel skins on the street and the other people on the street didn't want to pay the fine. Larger houses had their own latrines which were emptied out by gong farmers. If the gong farmers found anything valuable in the waste they got to keep it. (Forfeit: Throw it out of the window)

- There is no particular time of day when a cock will crow. Cockerels will crow throughout the entire day. Cockerels seem to know it is dawn because of their internal body clock. Cocks crow for several reasons, including warnings, territorial claims, showing dominance, and to tell other cocks they have just mated. They crow at an average volume of 100db if you are standing within a few feet, which is about the same as a chainsaw. It can be as loud as 143db, and human eardrums rupture at 150db. The cockerel's hearing isn't damaged because of their eardrum is covered by a bit of soft tissue which dampens the noise. When their tilt their head back to crow, another bit of material covers the ear canal completely. (Forfeit: When I wake up)