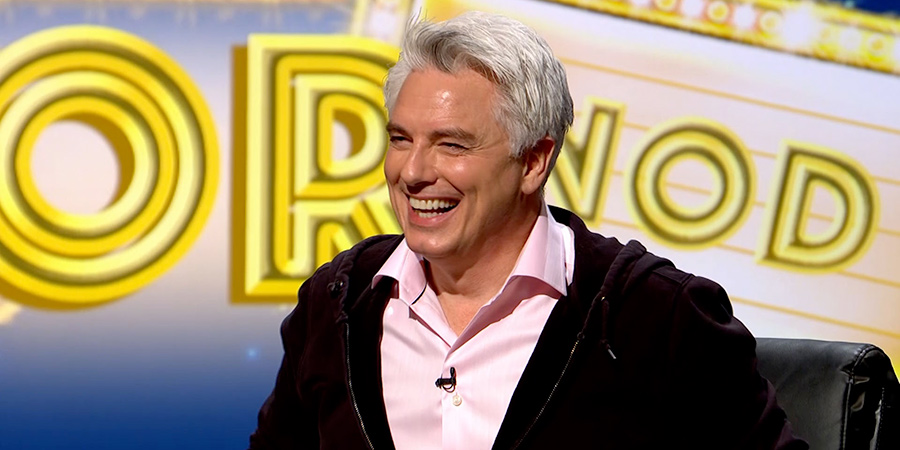 Sandi and Alan are joined with Eshaan Akbar, John Barrowman and Victoria Coren Mitchell to look at all things shaky and shady.

- The panel are asked to name something invented in Shaky Town or Shady Town. Comrie village, Perthshire, is the home of modern seismology, and is thus nicknamed: "Shaky Toon". It had thousands of earthquakes between the late-18th and mid-19th centuries due to the Highland Boundary Fault, which Comrie is astride, and the village still has more earthquakes than anywhere else. Thus they built the world's first seismology station in the world in Comrie, called Earthquake House, and organised by the local postmaster who created one of the earliest measures for earthquakes. On this scale, a ten was a quake in October 1839, while a one is called "Just Sensible" - as in it can just be sensed. The device used to measure the quakes involved two wooden beams, one north-south and the other east-west, with wooden cylinders of various sizes on top. Different sizes of quake caused the cylinders to fall. However, the building of Earthquake House coincided with the end of Comrie's great earthquake era, so it wasn't used much. The House has since been fitted with equipment so sensitive that it was able to pick up the Boxing Day tsunami of 2004 in Indonesia. "Shady Toon" is Lochranza, Arran, (60 miles from Comrie) is the UK's possibly the world's shadiest town. It gets fewer annual hours of sunshine than anywhere else because it sits on a north-facing glen on a rainy island, and has no street lights. It is also the birthplace of modern geology. James Hutton, father of modern geology, visited in 1787 and there discovered "Hutton's Unconformity", a junction between different types of rock formation, and these could only have been formed over a vast amount of time, thus the Earth could not be young. In 1788, he wrote: "The result therefore of our present enquiry is that we find no vestige of a beginning - no prospect of an end."

- Tangent: Victoria is hoping the question is on Shakin' Stevens. She was a big fan of his as a child and thus knows a lot about him. The day after recording this episode is his 73rd birthday, and Victoria says: "I still would." Victoria not only knows his birthday, but knows that his favourite colour is indigo, his real name is Michael Barratt, and that his stage name was taken from his old school friend Steven Vanderwalker.

- The dark side of puppeteering is shadow puppetry, or to be exact wayang of South-East Asia. Dating back a thousand years, these shows normally tell the stories of Hindu epics, and last eight hours or more. As the movement is dying out some puppeteers have tried making shows for younger audiences themed on Star Wars, and wayang shows are now being used to explain Covid-19 and the destruction of coral reefs. The puppetry is quite complex, and traditionally there is just one highly respected puppet master, called a dalang. It used to be the case that Indonesian children wanted by dalang when they grew up. Normally, boys worked the puppets and girls play the "gender" (pronounced "gen-der"), a musical instrument akin to a glockenspiel. Although the puppets cast shadows, they are highly decorated. Most of the shows are improvised.

- Tangent: John has a large Star Wars collection, including a whole section of his garage devoted to memorabilia, and Darth Vader pyjama bottoms and a top to go with them that says: "I'm your daddy." Eshaan has never watched Star Wars.

- Tangent: When Victoria first took her daughter to a puppet show, Victoria was annoyed by the fact that the puppeteer came out with his puppets and spoke to the audience, because to a child the puppets are real and it breaks the illusion. John asks Sandi if she has ever worked with the Muppets, and she has. The person operating Kermit has the puppet on their head.

- The panel are shown a picture of a man and are asked what is shady and two-dimensional about him. The person was Etienne de Silhouette, who was the French Minister of Finance for just eight months under Louis XIV, and he is the man after whom silhouettes are named. The usual explanation of how his name came attached to such pictures is that his austerity policies, which eventually got him fired, caused his name be associated with thriftiness, and silhouettes were cheaper than oil portraits.

- Tangent: The panel bring on Charles Burns, a master silhouettist, to discuss the matter more. Silhouettes only died out when photography was invented. Some silhouette studios had a physiognotrace, which consisted of a bar that passed around a person's profile, at the other end was a pencil which drew the profile upside down. Burns however just uses scissors, and makes silhouettes of the panellists.

- Tangent: There was an automaton called Prosopographus, which was set up in the Strand in the 1820s by silhouette artist Charles Herve. It consisted of a small robotic figure sitting on a box with a tablet in one hand and a stylus in the other, which drew the outline of the face. No-one knows how it worked, but some visitors reported seeing: "human eyes behind curtain", so it may have been a hoax.

- Tangent: The panel are shown Rubin's Vase, the famous optical illusion in which you sometimes see a vase or two faces looking at each other. Created by Danish psychologist Edgar Rubin in 1915, the picture is designed so the brain cannot tell the difference between the object and the background.

- Tangent: There are also two British artists, Tim Noble and Sue Webster, who make silhouettes out of rubbish.

- The McKinley grip was the distinctive handshake used by former US President William McKinley. In the 19th century, the tradition in the USA was that if anybody wanted to, they could turn up at the White House on New Year's Day and shake the President's hand. McKinley, who was a Republican President between 1897-1901, was said to have shaken 5,000 hands in a single session. He had to shake quickly however, so he developed the McKinley grip. This consisted of a beaming smile, you grab their hand before they can take yours, give it a swift squeeze, and then with your other hand you hold their elbow and push them away, so you can move onto the next person. His handshaking however was to ruin McKinley, when on 6th September, 1901, in Buffalo, New York, at the Pan-American Exposition, an anarchist called Leon Czolgosz turned up with his right hand covered with a handkerchief. McKinley assumed Czolgosz had an injury, but Czolgosz was hiding a gun and shot McKinley at point blank range. McKinley died of an infection eight days later.

- Tangent: As well as hands we shake heads, but in some cultures like in Bulgaria, they shake their head to mean "yes" and nod to mean "no". Sandi thus makes the panel ask a series of quick-fire questions while shaking and nodding their heads in the Bulgarian style. No-one knows why the Bulgarians do this, but one theory is that they were forced to change their religion by invaders, and thus pretended that no meant yes when asked about their faith. John did a movie in Bulgaria in which he was diving. He had to go into a big tank and was given a small oxygen canister so he could breath, then hide the canister and escape the tank. When John asked one of the Bulgarian crew if the tank was unlocked the crew member shook their head and said: "Yes", meaning John was still confused by the answer. The film was Shark Attack 3: Megalodon, which John claims bought him his first place.

- Tangent: Even more ambiguous jesters include the head bobble found in India, Pakistan, Sri Lanka and Bangladesh. According to behaviourist Pradeep Chakravarthy of Tamil Nadu, it may have evolved to give a deliberately ambiguous signal.

- The best way to sabotage a sewage system is with a sponge. In 1944, the US Office of Strategic Service, the forerunner of the CIA, created a Simple Sabotage Field Manual, a guide listing different ways of undermining the enemy, such as making the economy, morale or military offensiveness worse. It says that the best way to sabotage a sewer is to saturate a sponge in a thick starch or sugar solution, squeeze it tightly until it is a ball, wrap it with string to keep it in the ball, and then let it dry. Once it is dry, remove the string, flush the sponge down the lavatory, and the sponge will gradually expand back to its normal size, plugging the sewage system. The same manual also offers advice on destroying the lighting system in a factory, which is to turn the lights off, unscrew a light bulb, put a coin into the socket and put the bulb back in. Once the lights are turned off, the entire system short circuits. It also suggests damaging the petrol tanks of vehicles by filling them with sugar or urine; and starting arguments on trains: "if you work for the railway, issue two tickets for the same seat."

- The best way to prepare for a deep suntan without burning is by using suntan lotion. Indeed, it is the only way. The idea of getting a base tan from a tanning salon is nonsense. To test the idea, they need skin which had zero exposure to the sun: British bottoms. The buttocks were exposed to simulated sunlight for two weeks, and the resulting tan gave a tiny bit of protection, allowing someone to spend an extra ten minutes in the sun. Tanning parlour sun beds are worse than natural sunlight, with indoor tanning causing 420,000 cases of skin cancer per year in the USA.

- Out of the four panellists, none of is close to inheriting the throne. The list of succession is extremely limited. You have to be a direct descendent of Princess Sophia, Electress of Hanover. Born in The Hague in 1630, she was the granddaughter of James I, and was chosen as heir to the throne to ensure a Protestant monarch in the event that William III or Queen Anne died without issue, which they did, and to block the Old Pretender, the Catholic James Stuart, from becoming king. Sophia however died two months before she was due to take over, so instead the next monarch was her son George I. Sophia spoke five languages, and was educated in theology, history, mathematics and law. She was buried in the Berggarten Mausoleum in Hanover, which ironically, given that all British Royalty is descended from her, was almost completely destroyed by allied bombing during World War II. (Forfeit: Yas Queen; Alan)