The adage about a man and his dog is put to the test in a short inspired and co-written by Alan Davies.
Preview clip 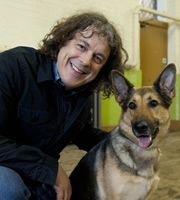 The Curious Incident Of The Dog In The Daytime