Little Tommy Tiernan's parents are going through a rough patch and, after speaking to a therapist, his dad has been advised to unleash his inner canine and bark his stresses out. 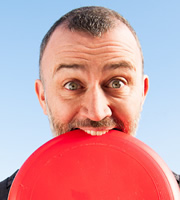 2010s. Things are pretty strained in the Tiernan household. Nigel's mother and father have divorced and, after speaking to a therapist, his dad, Tommy, has been advised to unleash his inner canine and bark his stresses out.

He's not the only member of the family needing a bit of relief either, what with Tommy's beloved pet pooch suffering from constipation. The timing couldn't be worse and, following a mix-up involving mislaid medicine, this touching father/son/dog tale flags up the importance of letting go.