The Prince of Thieves offers a few pearls of wisdom in a short inspired and written by Jack Whitehall.
Preview clip 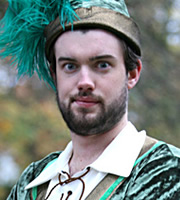 Jack Whitehall and his dad don't see eye to eye. Jack, you see, is a dramatic child with a penchant for running away, and dressing up as his favourite heroines. Yes, heroines. Despite Dad's efforts, Jack isn't boys' boy, although progress is made when his son starts donning a slightly more masculine costume, that of Robin Hood. Then Jack announces what he wants for his birthday: Barbies. Plural. Dad's not having any of it, so Jack runs off, bumping into a certain Prince of Thieves, who just so happens to be an expert on father-son relationships.