A budding young actress receives a boost in a short inspired by the life and times of Barbara Windsor.
Preview clip 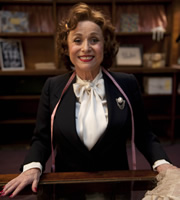 At 15, Barbara Deeks is already appearing in the West End, but she isn't as confident as she seems. Just four feet ten and a half, Barbara's embarrassed by her developing physique, and while the local boys are fascinated by her bosom, she is confused by it. When a stern wardrobe mistress publicly embarrasses her by trying to strap down her chest to make her look like the 10-year-old she's playing, Barbara goes home devastated. Realising her little girl is growing up, Barbara's mum takes her to be measured for her first bra... Barbara enters the shop a girl, and emerges a woman.

Behind The Scenes With Barbara Windsor

An exclusive interview with Barbara Windsor, filmed on location of her Little Cracker for Sky 1. She explains the premise of her show.