It's all about that father-(puppet)son bond in a short inspired, written and directed by Harry Hill.
Preview clips 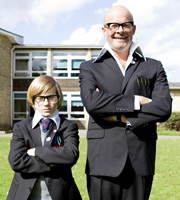 After a scuffle between Harry Hill, Little Harry Hill and Teenage Harry Hill over whose Cracker this actually is, our tale begins and it's a tall one at that. Harry and his Thai bride are ready to raise a child, so jet off to Africa to buy themselves one, specifically a puppet boy by the name of Jimi. As the years pass, Harry realises just how talented his adopted son is on the electric guitar, having acquired quite the celebrity following, notably Paul Daniels and Debbie McGee. Could it be that Jimi Hill is in fact Jimi Hendrix?

Harry Hill interrupts his own flashback.

Behind The Scenes with Harry Hill