Nineteen-year-old Joanna Lumley is still finding her feet in the competitive world of modelling.
Preview clip 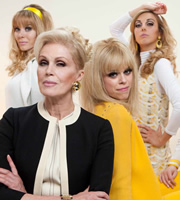 1965. Nineteen-year-old Joanna Lumley is still finding her feet in the competitive world of modelling and, feeling insecure about her unconventional looks, decides to cover up her cropped locks with a long blonde wig. It seems to do the trick when Jo impresses the egotistical photographer calling the shots at her next shoot.

He's not so keen on her co-stars, though, pointing out their little imperfections with glee. Realising that a lot of things are more important than pleasing smarmy snappers, Joanna goes ape - quite literally.

The young Joanna embarks on a modelling career with a little help from a blonde wig...