Dylan Moran returns home from his first interview with bad news... he's been beaten up and had his mobile phone stolen. 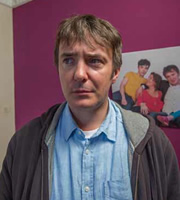 2000s. No matter how old they are, parents will always treat their kids like kids. That's exactly how Michael feels, even though he's left school and heading into the world of work.

He returns home from his first interview with bad news, though, having been beaten up and had his mobile phone stolen. With Mum away, Dad is left alone to raise the boy's morale, but it's the son who ends up being the parent.

In a fit of hapless, protective rage, the father chases after the (wrong) muggers and his son sees that maybe it's his middle-aged dad who's experiencing the most awkward time of life.