The nominees for The British Comedy Awards 2013 have been announced.

The list includes multiple nominations for Count Arthur Strong, Psychobitches, Would I Lie To You?, A League of Their Own, 8 Out Of 10 Cats Does Countdown, Getting On, Adam Hills and Alan Carr.

A League of Their Own

James Corden (for A League of Their Own)

Jon Richardson (for 8 Out Of 10 Cats Does Countdown)

Nina Conti (for Live At The Apollo)

Sue Perkins & Mel Giedroyc (for The Great British Bake Off)

Kevin Eldon (for It's Kevin)

Jo Brand (for Getting On)

Vicki Pepperdine (for Getting On)

There will also be three special awards given out on the night:

The Award for International Achievement

King Or Queen Of Comedy Award


Voting is on-going for the King or Queen of Comedy Award. Below are the six nominees, with the numbers to call. Voting lines will be open until approximately 10pm on the night of the awards, with Jack Whitehall announcing the result live as part of the ceremony. Nominee profiles

Calls from mobiles and BT landlines cost just 35p (other landlines may vary). You may vote more than once. Full terms and conditions at channel4.com 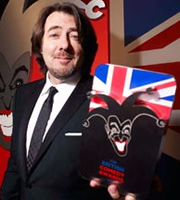 The British Comedy Awards Nominations Show, which will include clips of the nominees in action and interviews with many of those involved, will be broadcast on Channel 4 tomorrow (Wednesday 4th December) at 10:45pm.

This year, the programme will include the announcement of which show has won the Best New Comedy Programme category.

The main ceremony is on Thursday 12th December 2013. Jonathan Ross (pictured) hosts again, with the results broadcast live on Channel 4 from 9pm.