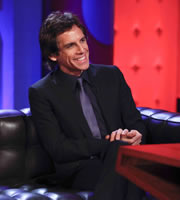 In his first ever British TV interview, Eminem joins Jonathan Ross. He talks candidly about dissing celebs (Sarah Palin, Jessica Simpson, Amy Winehouse) on current single We Made You: "These aren't personal attacks, it's like picking names out of a hat... (but) Sarah Palin, I want to nail her!"

He also discusses his battle with addiction: "I just wasn't taking care of myself, at times I wanted to just give it up, I was in a dark place. I wanted to pull back from the spotlight to reassess my whole career... I got sober (but) it was pretty rough. A couple of years were bad for me."

And about fighting colour prejudice: "It wasn't easy, I was pulled off stage many times but you keep at it, I had my doubts but this was all I had."

Also joining Jonathan is Ben Stiller, who confirms there will be a new Zoolander movie and a sequel to Meet The Fockers: "It's a few years later, we have kids... possibly Meet The Little Fockers."

Ewan McGregor defends Angels And Demons against Vatican criticism: "I think it's a hangover... The Vatican was upset with Dan Brown's book The Da Vinci Code... I don't think there's any element of anti-Catholicism in the film."

And confirms he's planning a sequel to Long Way Down, and that he's left the UK: "I moved to the States... I thought I'd always live here but now I come back as a visitor."

Eminem performed We Made You.