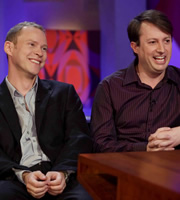 Jonathan Ross welcomes Davina McCall to this week's Friday Night With Jonathan Ross. She says she's tempted to do This Morning if only to sit next to 'silver fox' Phillip Schofield: "I love Phil, I've got no idea what's going on... but you never know." And she tells Jonathan how she won't go on Strictly Come Dancing because she can't face losing: "I'd have to win because I'm so competitive." She also says she gets abuse for presenting Big Brother - "people are so snobby" - and reveals that her favourite housemate was Anna Nolan from series one: "In the whole ten years, she's the only one I want to be my friend, I'm still in touch with her."

Matthew Fox from the US TV series Lost is also on the show; he admits he won't miss Hawaii: "The weather's perfect all the year round, it's a bore, I'm not a beach person."

Jonathan is also joined by comedians David Mitchell and Robert Webb. David says he is staying single, wants to be the next TV detective and confirms two more series of Peep Show.