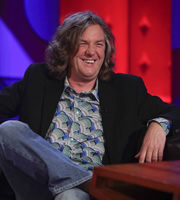 Jonathan Ross welcomes Dame Vivienne Westwood. She makes an impassioned plea about climate change and says politicians are stopping us from saving the planet: "We can only be saved by public opinion... we're at war with something that's never happened before, we have to make politicians do what we want." Dame Vivienne says she is close friends with Prince Charles: "He's doing more than any politician in my lifetime."

And she presents her fashion philosophy for the recession: "Buy less, choose well, if it's dirty don't bother to wash it, don't keep buying things for the sake of it." She thinks OAPs are best-dressed: "In the street the only people I notice are at least 70 years old, because they're so stylish." And she leaves all the housework to her young Austrian husband: "I haven't used my washing machine or my Hoover since I've been with him."

Also on tonight's show, James May says the Top Gear team are doing their bit for the environment: "We're hastening the demise of cars because we just treat them as a laughing stock."He reveals he prefers small slow cars: "Powerful posh cars are lovely but the best fun is a small under-powered car."

And admits he had a hippy moment during his trip to the edge of space: "I had that terrifying feeling... looked at the black void and thought that is actually all there is... we should make a big effort to get on better... then I went to the pub."

He reveals that Jeremy Clarkson even swears in his sleep. He says sharing a tent at the North Pole was like being with "a giant swearing maggot!"

James also says he caused a car crash the last time he went driving with Richard Hammond, and he is building a country retreat made entirely from Lego.