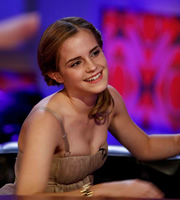 Jonathan Ross welcomes ABBA maestro Benny Andersson to this week's Friday Night With Jonathan Ross on BBC One. Benny says, despite press rumours, they won't be taking over Michael Jackson dates at the O2: "No-one's asked us, and if they did we wouldn't say yes." But he refuses to rule out a reunion: "But never say never." Jonathan joins him for an impromptu ABBA singalong.

In an exclusive TV interview, Emma Watson says she hated her long-anticipated screen kiss with fellow Harry Potter actor Rupert Grint: "I pounced on him, I was so desperate to get it over with." She didn't think she'd ever be Hermione: "By the time I got to audition, I was in pieces, I didn't know I had the part."

And she denies she missed out on childhood: "I never felt like I was missing out... we were able to be kids because we were together, whatever weird thing we were doing." Emma confirms her future lies in acting: "Definitely... I'm so excited about going to university but it doesn't mean to say I can't do something else, I want to have my cake and eat it... I'd like to try comedy."

ABBA fan Sandra Bullock denies she's had plastic surgery: "I was accused of it but no-one has asked me to alter my appearance. She also thinks Hugh Grant should be a novelist: "He's too smart to be an actor, he should write a great novel."