Chat and music with Jonathan Ross. He is joined in the studio by unlikely music phenomenon The Singing Priests. There is also a performance by one of the biggest bands on the planet, The Killers, and a chat with their frontman, Brandon Flowers. 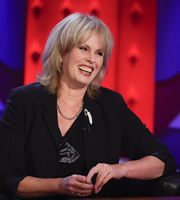 Jonathan Ross welcomes Joanna Lumley, "The Queen of the Gurkhas". She talks about meeting the Prime Minister Gordon Brown: "... the Lumley self-pleading offensive... I begged him to take it into his own hands... the Government was being fed scare stories."

She says she won't stand for Parliament: "Glimpsing what they have to do, it's such hard work, pretty punishing." And she cares more about the environment than politics: "We're closer than we think to disaster in a terribly short time." Joanna also says she wouldn't choose to be an actress now: "If I started life again I would want to be a forester."

Killers frontman Brandon Flowers admits he's not a Mormon in the strictest sense and talks about the pressure of success: "I get defensive, it comes from being self-conscious, I'm starting to get more confident in my skin."

Catholic global phenomenon The Priests don't think women should be admitted to the priesthood. They say: "We embrace celibacy... people find that bizarre but it reminds us we believe... there's a spiritual element to our work." Also that gay men can be priests "so long as you're not practising as a homosexual." And the Roman Catholic church shouldn't change: "There have to be some norms that are unchanging or there would be chaos."

The Klllers performed Human, The World We Live In, Mr Brightside and When You Were Young.