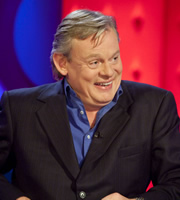 Lady GaGa joins Jonathan Ross. She says success won't change her: "I choose to ignore all of that, I don't care about all those things... the thing that raises you to the top is the thing that shoots you in the face."

And she used to freak out her parents: "My father thought I'd lost my mind, it was a bit difficult for them... but they're very cool, now they're proud of me."

Also on tonight's show, Hugh Jackman talks about the perils of filming Wolverine: "We did it all our own stunts, Liev Schreiber took me out a few times. I stabbed a stunt double - but I didn't faint!"

Martin Clunes talks about the press: "They laugh at your jokes then they go away and say 'he's got a face like a murderer'. He says he didn't think he'd be successful: "I got someone else's life, I had periods when I thought acting was stupid."