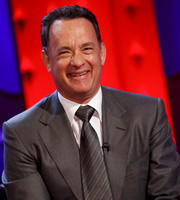 Hollywood star Tom Hanks joins Jonathan Ross this week. Tom confesses he's a big Loose Women fan: "Angels And Demons - the new name for Loose Women! They're the type I was too shy to approach."

And those Loose Women also join Jonathan on the couch. Carol McGiffin talks about her toyboy: "I'm going backwards, I think I'm ten years younger than I actually am," but fellow host Coleen Nolan doesn't approve: "an older woman going out with someone they could have given birth to!". Carol also reckons they're better than men: "Men don't like being so open about their emotions... all they want to do is be funnier than each other"... "we've been accused of sexually harassing male guests... if they weren't up for it, we wouldn't do it." Whilst Jane McDonald confirms she won't be getting married. Coleen also attacks press stories about her son: "It was reported wrong, I'm not naive, I knew why he was going to Amsterdam. I'm not a bad mum... and he wasn't a virgin!"

Finally, Dizzee Rascal talks candidly about the stabbing attack that nearly killed him: "It was a case of wrong place, wrong time, you learn from it. I'm still here," and performs new single Bonkers live in the studio.

Tom Hanks does the 'Big' rap