Jonathan Ross continues his current series with an exclusive interview with West Wing hero and Hollywood royalty, Martin Sheen. He is also joined by the queen of the paranormal, Most Haunted's Yvette Fielding; outrageous iconic diva Grace Jones; and EastEnders heart-throb Scott Maslen. 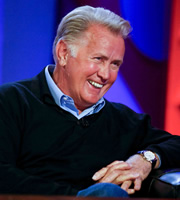 Martin Sheen talks candidly about his hatred for former US President George Bush: "He was a bully, we were savaged by his lack of leadership." And he says: "After eight years of dictatorship a lot of people died, suffered, there was never any inkling of regret from this man." He also speaks of his admiration for President Barack Obama: "He's loved, it's not fakery, I thank God for Barack Obama."

Sheen also tells Jonathan how he nearly went to prison during The West Wing: "I was on probation for three years... I was very careful not to be arrested because I would have gone to jail." And he says he would be dead if he still drank: "I'm an alcoholic... I wouldn't be here if I was still doing that."

Also in this week's show, EastEnders' Scott Maslen reveals there's trouble ahead for Jack and Ronnie. "They're back together but then it gets a bit bunny boiler-y, he starts to realise there's an ulterior motive, he wants to wait [for a baby] - these two are destined to be together... and then not," he says.