Chat and music with Jonathan Ross. Featuring an exclusive interview with Dustin Hoffman, enigmatic bad boy ex-footballer Eric Cantona, and the triumphant return of The Gossip. 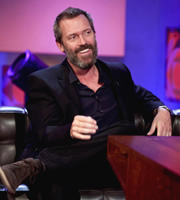 Jonathan Ross welcomes Eric Cantona to this week's Friday Night With Jonathan Ross. The footballing legend says he's interested in managing Manchester United: "I had a great time here, the best time of my life was when I was in Manchester." He admits his infamous "seagulls" quote meant nothing and that he doesn't regret his controversial past: "[Being banned] was difficult, maybe I deserved it, gave me time to think. You have to come back even better... I don't have any regrets, I just wanted to play the game." He also rejects adulation, saying: "The only thing I'm sure about is my doubts."

Hollywood star Dustin Hoffman also joins Jonathan and says he wants Eric Cantona to be the next James Bond. He tells how he never made it up with Kramer v Kramer co-star Meryl Streep: "She was pi**ed off, I don't think she's forgiven me."

Hoffman also discusses ageism in movies: "At my age they don't write leads but women have it much worse." He says that he looks forward to making the next Fockers movie and that he rates fellow guest Hugh Laurie in House: "The best American accent that I've heard that isn't by an American; it's the money."

Hugh Laurie says he wants Stephen Fry to join the cast of House: "It could happen one day." And reveals he can never perform live because of stage-fright: "I couldn't do it again, I really thought I was losing my marbles."