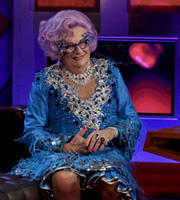 Jonathan Ross welcomes U2's Bono and The Edge to this week's show. Talking about meeting top politicians, Bono refuses to condemn George Bush: "I made my feelings very clear with him, he did a lot for our issues." And says he admires Tony Blair: "He's done some amazing things."

He tells Jonathan how he shared a joke with Barack Obama: "I was avoiding being hugged by Bush, he said nice work with the hug dodge!" He also explains that he never gets nervous before meeting world leaders: "They should be nervous because they're elected, they will be accountable, they make promises and don't keep them, I'm never nervous."

And he shrugs off media criticism: "It's an uncomfortable photo to be in, a rich rock star with the poor and vulnerable but it's that juxtaposition that allows us to twist the arms of people."

Bandmate The Edge admits he once punched Bono in the face. "There are always tensions," he admits, whilst Bono adds: "We break up at the end of every album!" And the band confirm their first musical will premiere on Broadway next year. Indeed, they think the best is still to come for U2: "The next few years might be our heyday."

Finally, Bono and fellow guest Dame Edna Everage reveal a mutual attraction: "I'm not sure I could turn the dame down... I'd go there with her!"