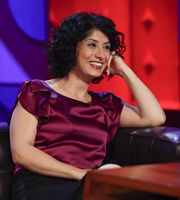 Jonathan Ross welcomes Tim Henman to this week's Friday Night With Jonathan Ross. He says that he thinks Brits lack grit: "Our kids get comfortable too early... our kids don't have that determination." He also says of Andy Murray: "I think Andy will go on to far bigger things than I achieved... he'll win multiple slams, he's that good." He denies he lacked killer instinct as a player: "If you don't think you're going to win it's not worth turning up. I fancied my chances at Wimbledon... but there was always Sampras!" Finally, he admits he's glad he isn't playing now: "I don't miss it, I stopped at the right time."