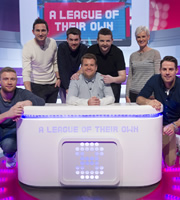 It's David versus Goliath when, after receiving some top tips from tennis Grand Slam winner Pat Cash and former British number one Tim Henman, Jamie, Fred and Jack take on legend John McEnroe in a match at the Royal Albert Hall - who do you reckon will shout "You cannot be serious" first?

Then, in honour of Lampard (who missed a penalty against pop squirt Justin Bieber in a friendly kickaround in 2011), Popstar Penalties makes a comeback, with Jamie fielding shots from 5th Story's Dane Bowers, Ultravox frontman Midge Ure and Steps favourite H.

A League Of Their Own - Series 8 Trailer

The man who got an Andy Murray tattoo

Guest on the show, Will, was so confident Andy Murray would lose the 2013 Wimbledon final, he vowed to get a tattoo if he won.

The high energy trailer for A League Of Their Own Series 8.

Freddie & Jack go wild for H from Steps as he prepares to face Jamie Redknapp.

Kevin Bridges and Jack Whitehall take part in the Highland Games for the Right Guard Challenge.