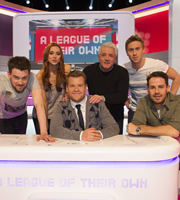 Maximum speed, minimum friction, lots of lube... It's just a typical day in the office for Corden and co, who are joined in the studio by Liverpool legend and former England manager Kevin Keegan, comic Russell Howard and Saturdays singer Una Foden.

Before things get slippery, we're off to a spicy start, with Fred and Jamie going head-to-head in Wasabi Russian Roulette, taking turns to scoff a spread of sushi rolls, one of which is laced with chilli and atomic amounts of wasabi sauce.

Some deserved downtime is squeezed in when Keegan temporarily resurrects his short-lived singing career to perform a special rendition of his 1979 hit Head Over Heels in Love (while perched on Jamie's knee), followed by an intense game of human bowling. Think heavily-lubricated comedians, a catapult and supersized bowling pins.

Everyone is up for this week's Right Guard Challenge, too, hoisted into the air for a spot of aerial acrobatics.

Kevin Keegan sings Head Over Heels in Love, his 1979 song.

Russell Howard and Jack Whitehall lube up for human bowling

Jack Whitehall and Russell Howard try to knock down some pins.

The teams find it hard to hold on to the slippery silk whilst wearing sparkly outfits.