James Corden and the gang return for an all-new run of the smash-hit sports panel show. With gold medallist Amy Williams, Dutch footballer Edgar Davids and Jimmy Carr as guests. 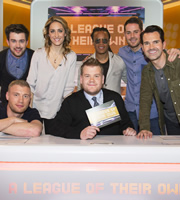 James Corden and the gang return for an all-new run of the smash-hit sports panel show. Jammed with challenges, from the silly to the super-sized, the latest campaign kicks off with a top-drawer line-up of guests, namely former skeleton racer and Olympic gold medallist Amy Williams, Dutch football star Edgar Davids and comedian Jimmy Carr, not to mention a whole lot of ribbing.

It's straight down to business as Jamie Redknapp welcomes Davids and Carr onto the Red team, while Freddie Flintoff and Jack Whitehall nab Williams for the Blue.

The first round takes inspiration from an eventful rally car race which saw one member total a £100,000 vehicle (ouch), before playing matchmaker and pairing various celebrities with their unlikely friends - Sex and the City's Kim Cattrall and Stevie G anyone?

Keeping the players on their toes, referee Corden breaks up proceedings with a game of one-on-one footie... dressed in zorb suits. Whitehall is pitted against Carr, before facing a far more formidable foe in Davids.

The stakes are then raised for the final challenge as the teams attempt to answer as many questions as possible while Whitehall and Carr conquer an SAS-style assault course complete with scream-y Ross Kemp types. Which side will bag the first win of the series? 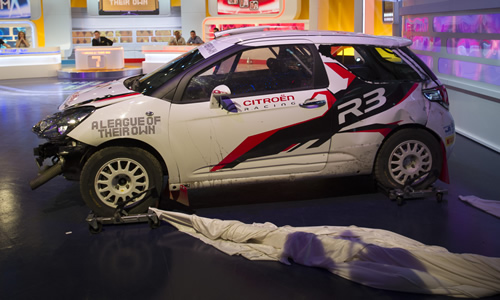