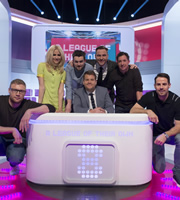 Big news: Freddie Flintoff is a spectacle wearer. Bigger news: James Corden has history with one of this week's guests, pop star Pixie Lott. Things get slightly awkward when the soon-to-be Late, Late Show host reveals that, before meeting his wife, he asked the Mama Do singer out on a date, a request she sadly rebuffed.

On the bright side, though, he's never tried to pull football legend Robbie Fowler and comic David Walliams, who round out the teams.

After a short interval about Jamie's old locker room habits and what Jack calls the Human Centipede Challenge, Corden and the gang enter the world of curling for the first time, ranked from best to worst by Olympic gold medallist Rhona Howie.

Jamie Redknapp and Robbie Fowler reminisce about bath time during their Liverpool days.

The Boys Curl One Out

British Curling Olympic Champion, Rhona Martin, teaches the boys how to curl... which turns out to be harder than expected.