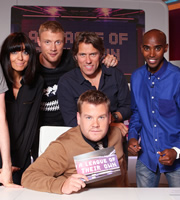 A clip from Series 6 of A League Of Their Own.