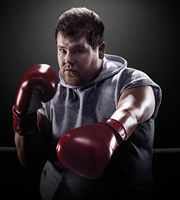 This first episode kicks off the series with an hour-long special featuring world heavyweight boxing champion David Haye, and the voice of Bob the Builder and man behaving badly, Neil Morrissey.

The first round sees the teams arrange three possible answers into their order of preference. This week's questions include: "Who has the most tattoos - Maradona, David Haye or Chris Hoy?"

The second round, Guest List, challenges the teams to come with up with the same answers a famous sports star has given in response to a question about their profession, and tonight the questions are all about The Hayemaker himself. What does David Haye think are the three best things about being a boxer?

The third and deciding round, Human Clock, is the ultimate test of knowledge and stamina. This week, John Bishop and Neil Morrissey go head-to-head as they don weighted skull caps in a chin-up challenge.

An advert for the show.