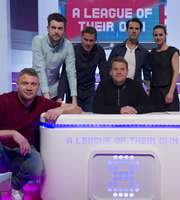 There is a Spice Boys reunion this week when Jamie's namesake and old Liverpool teammate Jamie Carragher stops by the studio - not to sideline our other esteemed guests, ALOTO veteran Jimmy Carr and Sky Sports presenter Kirsty Gallacher.

After getting Carragher's genuine thoughts on colleague Gary Neville (spoiler: he likes him, albeit in small doses), Corden moves on to the first challenge of sorts, to see if Jamie and Jamie can keep their cool while receiving a lap dance. It's a tricky proposition, especially when the dancer turns out to be another former Spice Boy; be warned, it's a sight that can never be unseen.

The team then give the Sky Sports Monday Night Football supercomputer a whirl to see who has the best punditry skills, offering up an analysis of an old Liverpool v Man Utd game.

A surprisingly aerodynamic Corden kicks off a game of Human Archery, too, followed by a show-closing triathlon featuring British athlete and Olympic medallist Iwan Thomas.

James Corden gets involved in the fun and games by becoming a human arrow.

Carragher & Redknapp get a lap dance

Things heat up with a guest appearance from Neil 'Razor' Ruddock who gives the two former Liverpool stars a special performance.

Iwan Thomas shows the teams how it's done. Will they be able to keep up the pace?!