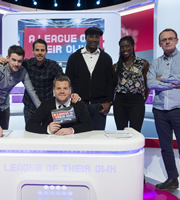 After some ribbing over Fred's efforts in the ring - not to mention the launch of Jamie's new aftershave which, fragrance fans, will take you from day to night - Corden rates a rant-off between Sean and Jack that covers everything from kittens to Gandhi.

Back to boxing, Fred and Jamie go against one another in the Rocky Relay, a tribute to the famous training sequences from the classic Sylvester Stallone movies involving log squats, meat punching and a fake chicken attached to a remote-controlled car.

Another sporting legend pops by in time for the Right Guard challenge, too: retired jockey Willie Carson, who oversees a steeplechase that Jack and Christine take part in.

James Corden gives Sean Lock some topics that he can rant about.

Jamie and Freddie are put through their paces by boxing legend, Lennox Lewis.

Jack Whitehall competes against Olympic champion Christine Ohuruogu in the steeplechase while the rest of the teams play the quiz.