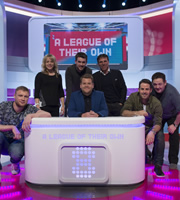 Fancy cocktails (sort of), fast cars (more accurately, mini motos) and a spectacular musical number (sub-par karaoke)... A League Of Their Own pulls out all the stops for the final episode of the series.

The guests aren't too shabby, either, with Team GB's first Olympic snow medallist Jenny Jones, comedian Johnny Vegas and football favourite Gianfranco Zola - once voted Chelsea's greatest-ever player - gathering in the studio to give Corden and the gang a send-off to remember.

Things get going with a tipple-tastic task for captains Fred and Jamie as they hit the bar to whip up an alcoholic beverage inspired by their sport superstar teammates, followed randomly and painfully by a Red and Blue rendition of Do-Re-Mi from The Sound of Music.

Corden takes a break from ref-ing, too, so that Gianfranco can have a go, before the return of the almighty mini motos in a full-throttle race featuring exploding bollards.

The end is in sight when Zola and Jenny take part in the climactic Right Guard Challenge, which puts a unique spin on fell running. Instead of leaping over mountains and the like, the pair will have to keep up with a tilted treadmill that's been suspended from the studio ceiling.

And just when you think it's all over, Corden, Fred, Jamie and Jake unleash their inner Jersey Boys - basically, dodgy falsettos - for a curtain-closing sing song.

Gianfranco Zola fulfils his dream of presenting his own show.

Gianfranco Zola, Jenny Jones and Johnny Vegas and the regulars show off their singing skills.

The boys join the stars of the West End Hit Musical, The Jersey Boys to perform a final musical number to close the series.