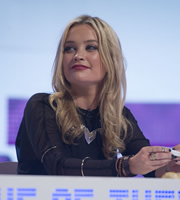 Coached by former netball pro Tracey Neville - sister of Gary and Phil - the gang, sans Townsend, go head-to-head against a team of super leaguers at Wembley Arena, before finding out who Neville has singled out as the most promising player.

Then, in a nod to Townsend, Corden gets a game of Street Soccer going, pitting Whitehall against the Tottenham and England winger to see who can smash the most house windows (please note, no real houses were harmed during the making of this programme).

Sacks, wheelbarrow races and space hoppers are required, meanwhile, for the final challenge when the Reds and Blues compete in a back-to-school sports day.

The guests get active

Micky Flanagan does 'The Crab' and Andros Townsend does the splits.

The teams take part in a sports day.