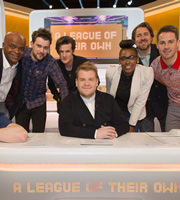 The revolving door of guest stars continues to spin with Timelord Matt Smith, swapping the Tardis for a spot on the Blue team, and TV presenter Jonathan Ross and British hurdling champion Perri Shakes-Drayton, playing for the Red. Plus, Whitehall's dream comes true when Kriss Akabusi stops by, but can the comedian prove he's the former athlete's number-one fan?

Corden and co also get glugging - well, Flintoff gets glugging - when Shakes-Drayton serves her tipple of choice, Guinness Punch, followed by an out-of-control mini-moto relay race.

The Right Guard Challenge wraps up this week's show as the Reds and Blues limber up for some aerobic gymnastics, with Akabusi stepping in for an injured Flintoff.

Jack and Jamie, along with special guests Perri Shakes-Drayton and Kriss Akabusi, limber up for some aerobic gymnastics.

Jack and Jamie, along with special guests Perri Shakes-Drayton and Kriss Akabusi, limber up for some aerobic gymnastics.

Freddie can alway be relied upon when the drinks are being passed around.