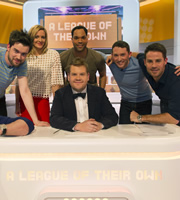 Do not get on the wrong side of Freddie Flintoff - that is the lesson learned in a particularly raucous episode featuring Manchester City and England defender Joleon Lescott and comic Jon Richardson, the latest additions to the Red Team, and TV presenter and ALOTO regular Gabby Logan, who plays for the Blue.

The pressure is on when Corden, Whitehall and Richardson make their way to Twickenham Stadium on a Six Nations match day to see who can score the most conversion kicks in front of an 82,000-capacity crowd. Top tips from legendary ruggers Steven Jones and Thomas Castaignède come in handy, though, for two of them at least.

A drift karting race is followed by a Right Guard Challenge that sends our players scurrying up a cross between a rock-climbing wall and a treadmill. Plus, in amidst all the action, Flintoff sheds light on his prank-playing days and, most memorably, Corden shares a revealing snap of former football star Paul Scholes that, be warned, you won't be able to un-see.

Four team members try to avoid the plunge while climbing moving walls in this challenge.