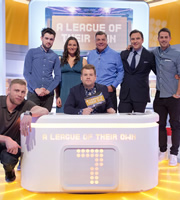 Cage-fighting, sheep testicles and an insight into Whitehall's sex life... welcome to the latest edition of A League of Their Own, featuring West Ham manager Sam Allardyce, funnyman David Walliams - both playing for the Red team - and Dame Sarah Storey, the most decorated female Paralympian in British history, and, now, a honourary Blue.

In the first challenge of the night, James Corden and the gang compete in a cook-off as they prepare their signature dishes for celebrity chef Jean-Christophe Novelli, from a perfect beef Wellington to a pheasant-based monstrosity. However, not everyone agrees with the fiery Frenchman's verdict.

Then, inspired by Storey, rival captains Redknapp and Flintoff have another go at the stationary cycling race, attempting to cover 500 metres in the quickest time. The Sky Sports pundit reigned supreme last time around, but when footage reveals the former footballer cheated, Freddie looks to exact revenge.

Gag reflexes are also put to the test thanks to a buffet of breaded ram testicles following Big Sam's anecdotes about the various forfeits he's had to face over the course of his career, before a Right Guard Challenge tailor-made for Walliams and Whitehall: one-on-one time with some of the country's most fearsome cage fighters. Plus, Whitehall learns not to confide in Corden off-camera about personal matters, especially ticklesome ones.

Celebrity chef Jean-Christophe Novelli puts the boys through their paces in a cooking challenge.