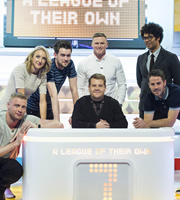 James Corden waves on another pick'n'mix line-up of panellists, including long-distance runner Paula Radcliffe - who still holds the world record time for the women's marathon - and England rugby star Chris Ashton, taking their seats on the Blue and Red teams respectively. The final addition to Redknapp's squad is comedian/actor/writer/director Richard Ayoade from The IT Crowd, an interesting signing given that he has absolutely no sporting knowledge. He does, however, have a lot to say about eggs (and his captain's eating of them) and dwarf-tossing.

Whitehall never fails to surprise and, this week, showcases his Morris-themed spin on the Haka, which promises to strike fear into the hearts of even the most steely of sportsmen. Will Ashton take it back to training with him

Strong stomachs are then required when the Saracens winger and Flintoff sample a fishy delicacy, followed by a mini marathon in honour of Radcliffe that leads nicely to the Right Guard Challenge: Whitehall and Ashton couldn't be better matched in a Strongman-esque contest overseen by British Strongman Jay 'Hollywood' Hughes.

Jamie Redknapp finds himself on the wrong side of Richard Ayoade's sharp wit.