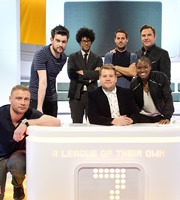 Getting in on the action this week are funnymen Richard Ayoade and David Walliams, playing for the Blue and Red teams respectively, and Olympic boxing champion and, arguably, the smiliest lady on the planet, Nicola Adams, who joins the Red. The presence of the gold medallist on the panel can only mean one thing: Freddie Flintoff is going to have to weather a flurry of merciless blows about his experiences in the ring.

Corden, Whitehall and Ayoade are then submitted to hours of intense psychological questioning to see who possesses the mind of a champion, followed by a knockout challenge inspired by Adams as David 'The Fist' Walliams and Jack 'Canvas Kisser' Whitehall suit up to become human punchbags while Redknapp and Flintoff throw as many punches as possible in 20 seconds. Still suffering from an injury, the former cricketer is forced to call on a friend...