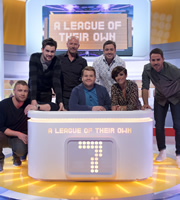 Redknapp and Flintoff go pint-for-pint in a milkchugging contest, and, following his success with last in series the 'Mobot', Corden decides to come up with anew goal celebration for Shearer. Then, in honour of the highest Premier League goal scorer of all time, A League of Their Own revamps old favourite, King of the Spin.

Seeing the show out, Whitehall and Sandford compete in the Right Guard Challenge, utilising top tips from Leicester Tigers and England rugby player Manu Tuilagi and attempting to score three tries while running across a set of treadmills.