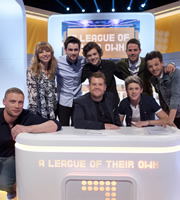 Calling all Directioners, three members of the world's biggest boyband - Harry Styles, Niall Horan and Louis Tomlinson - are picked to play this week for Redknapp's Reds. Radio 1 DJ Sara Cox, meanwhile, joins Whitehall and Flintoff on the Blue team. Amid lots of cooing and girlish squeals (and that's just from the panel), let the games begin.

A question about the sporting world's biggest liars - yes, Lance Armstrong makes the list - prompts various members to 'fess up, before Corden and Whitehall try their hand at shooting some hoops, going head-to-head in a shootout during an NBA basketball match between the New York Knicks and Detroit Pistons.

In honour of the One Direction boys, old favourite Popstar Penalties makes a welcome return as the trio takes turns in goal against the likes of Simon Webbe from Blue, Sinitta and Spandau Ballet's Tony Hadley. The Right Guard Challenge is not to be missed, either, involving free-throwing, water tanks and a sopping wet Styles.

Niall gets a tattoo

One Direction's Harry Styles is among the competitors getting a soaking in the challenge.