Nelson discovers the harsh reality of interspecies dating, Marion gets himself adopted after his previous owner dies, Destiny bites her owner so she can attend dog obedience classes and Kali implicates DJ Toby Anstis in one of her evil schemes.
Preview clips 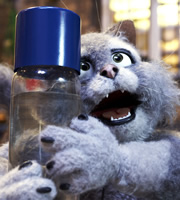 Nelson uses Toby Anstis's social networking login to set up a blind date with a human. However, he gets a shock when he discovers the Wendy he was planning to meet isn't a human being after all, but a chicken.

Destiny joins owner Gary for the canine horror show that is Strictly Dog Dancing and falls for badboy Rivers from the dog disobedience class. If she is to see Rivers again, Destiny has to start behaving really badly.

When Marion's owner dies, Kali sees an opportunity for Marion to pose as a missing cat called Chopsticks in order to rob his owner for all she's worth. Marion finds his new life most comfortable, until his new owner takes him to be neutered.

Some sources give this episode the unofficial title Chicken.

Vince gives his honest view of chickens in Cockney music form (not safe for work).