Nelson falls in love with Sandra, a mangy, flea-ridden fox whom he meets at the rubbish tip while rescuing Marion. Gary angers Kali after he erects anti-pigeon spikes on the pub walls, but Destiny is overjoyed when he enters her into a competition.
Preview clips 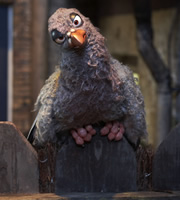 Nelson falls in love with a mangy, flea-ridden fox whom he meets at the rubbish tip while rescuing Marion. However, he fails to listen to his friends who tell him that the only reason he finds her so intoxicating is because she is on heat and he will regret it later.

Meanwhile, Kali is livid that pub owner Gary has erected some anti-pigeon spikes to prevent her from landing on the walls of the pub garden. She decides to take revenge.

And Destiny is overjoyed that Gary has finally entered her into the South Docklands Area Landlord Association Pub Dog of the Month category. However, when she catches fleas from Nelson's new girlfriend it looks as if her chance of winning is in jeopardy.

Song: Breaking Up Is Such A Faff - Sung by Nelson, featuring Marion and Sandra.
Written by Danielle Ward, Jon Brown and Daniel Peak.

Some sources give this episode the unofficial title Bin Day.

Destiny has persuaded her owner Gary to enter her into the local dog show. But will she be the top dog with the help of some fleas?

Nelson has fallen for disgusting vixen Sandra. He soon realises his mistake but can't get rid of her. Marion dresses up as a woman in an attempt to fool Sandra into thinking Nelson is already married.

Pub landlord Gary is fed up with the animals hanging out in his back yard. He brings in an expert who lays down a trap. Nelson and Marion get trapped.