With Destiny on heat and trapped inside the pub by sex-crazed zombie dogs, Nelson has a once-in-a-lifetime chance to woo her. Marion's night in is ruined when Vince reveals he's a karaoke hog. After a rickshaw driver runs over her dinner, Kali seeks explosive revenge. Guest stars include Ainsley Harriott and Russell Tovey.
Preview clips 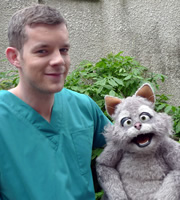 Remember: Zombie dogs have feelings too! They just can't help being attracted to Destiny's scent.

Destiny's in heat and zombie dogs are after her.

Mongrels Shaun of the Dead Parody

Mongrels very own homage to Shaun of the Dead. Zombie dogs are attacking and there's only one way to stop them...