Nelson organises a rooftop picnic to celebrate Vince's birthday, but things go badly wrong when an accident with a party popper puts Vince in a coma. Meanwhile, Destiny tries dating a bossy sheepdog and Kali plots her revenge on Harry Hill after seeing her mum getting electrocuted on You've Been Framed.
Preview clips 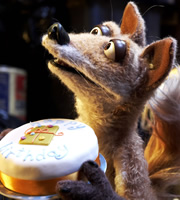 It's geezer fox Vince's birthday and, to surprise him, metro-sexual fox Nelson organises a rooftop picnic to celebrate. However, after an incident with a party popper goes wrong, Vince falls off the roof and ends up in a coma, leaving Nelson to look after his patch.

Stepping up to his new responsibilities, Nelson attempts to put the tearaways living on Vince's patch back on the right path by teaching them the benefits of being middle class.

Destiny tires of dating a bossy sheepdog, meanwhile, and turns her attention to a comatose Vince who, in his unconscious state, turns out to be the perfect date as he can never tell her what to do. It's all going so well, until Vince wakes up...

Meanwhile, cynical pigeon Kali plots revenge on Harry Hill after seeing her mum getting electrocuted on You've Been Framed.

Some sources give this episode the unofficial title Beatrix Reloaded.

Nelson and Marion attempt to wake Vince from his coma using singers from Boyzone and Westlife.

Tomcat Marion can't remember who or what the silent killer is. Is it Tim? Is it mumps? Or is it salt? Only Nelson has the answer.

Nelson teaches the other mongrels about the wonders of being Middle Class in song form.