It's the worst time of the year for the animals - Bonfire Night (aka 5/11). After failing in his job last year as a fire warden, Nelson faces an angry mob led by Marion demanding an end to the event for good. Kali has her wings clipped and discovers she is suddenly an easy meal for Vince. Destiny decides to pursue a modelling career.
Preview clips 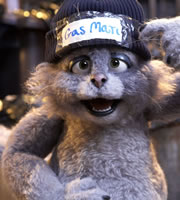 The return of Bonfire Night unearths some bitter memories among the Mongrels.

After failing to protect his friends as fire warden the previous year, metrosexual fox Nelson faces an angry mob demanding an end to the event for good. However, when a rather bewildered and incompetent Marion is nominated as leader of the rebellion, things don't quite go as planned. After having her wings clipped by a safety conscious Nelson to stop her flying into fireworks, a grounded Kali faces a new danger from Vince, who suddenly sees Kali as an easy meal. Kali has to do some serious plotting to devise a way of avoiding becoming Vince's dinner.

Meanwhile, Destiny sets her sights on a modelling career after being spotted by a dog photographer in the park. However, the result of the photo shoot isn't quite as glamorous as she had hoped.

Some sources give this episode the unofficial title Bonfire.

It's 5/11 (November 5th) and the Mongrels are worried about the Fireworks on Bonfire Night. Nelson has flashbacks to last year's event.

Ugly Women Are Beautiful Too Song

Destiny points out the differences between her and other women - in song form.